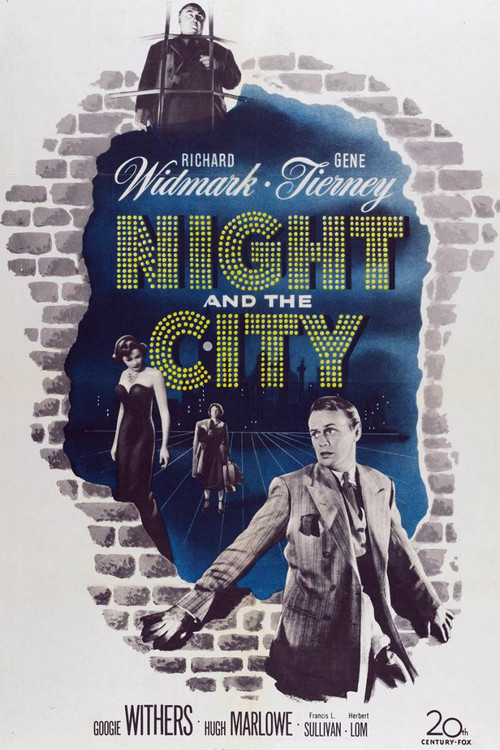 Night and the City

In post-war London, small-time hustler Harry Fabian (Widmark) ekes out an existence steering customers to the Silver Fox, a sleazy nightclub owned by the oily, obese Phil Nosseross (Sullivan). Wily and manipulative in his unquenchable drive to advance his fortunes via various shady schemes, Harry even stoops to stealing from his devoted singer-girlfriend, Mary (Tierney). He finally gets his chance at the big time when he cons retired Greco-Roman wrestling star Gregorius (Zbysko) into a new promotional scheme, only to face the wrath of Gregorius's well-connected and dangerous son, Kristo (a young Herbert Lom, later Chief Inspector Dreyfus in the "Pink Panther" series).

The noirish name of Jules Dassin's classic thriller says it all. Widmark, here in the role of penny-ante loser more than hardened criminal, manages to be at once hateful and pathetic as conniver Fabian, running through dark, dank back alleys to flee those he's fleeced. Lom and Sullivan are also stellar as the underworld kingpins he inevitably stings — and who mete out punishment accordingly. Vivid camerawork, frenetic pacing, and a palpable sense of anxiety drive Dassin's final, pre-blacklist Hollywood picture to a heart-pounding finish.

Night of the Living Dead