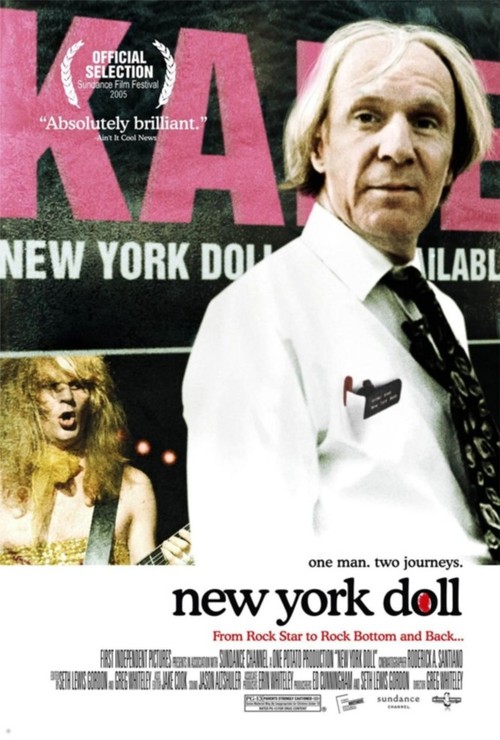 After his seminal New York glam-rock band The New York Dolls self-destructed in the mid-'70s, bassist Arthur "Killer" Kane tried to keep his music career afloat in LA, to no avail, and sank into alcoholic depression. Meanwhile, frontman David Johansen went on to have a glitzy, lucrative second life in the spotlight appearing in Hollywood films and performing under the alias Buster Poindexter. This film catches up with Kane, now living a quiet, unassuming life as a Mormon librarian, as he goes about his daily routines. Then British pop star Morrissey comes calling, asking Arthur — who hasn't touched an instrument in 30 years — to appear at a Dolls reunion in Britain with his former bandmates David Johansen and Sylvain Sylvain.

This rollicking, poignant documentary revisits the infamous career of the Dolls, who made a raucous, proto-punk racket in the early 70s, tarted up like male prostitutes. But the focus is squarely on Kane, a soft-spoken, gentle man whose equable presence belies his past as a bad-boy rocker. In interviews with Chrissie Hynde, Sir Bob Geldof, Iggy Pop, and many others influenced by the Dolls' sound, as well as church officials who've grown close to Kane, a portrait emerges of greatness derailed by substance abuse and personal conflict. Most moving is listening to Kane fret over his acrimonious falling out with Johansen, and the suspense involved in their initial meeting. The triumphant 2004 reunion concert is both cathartic and deeply moving.

New York in the Fifties