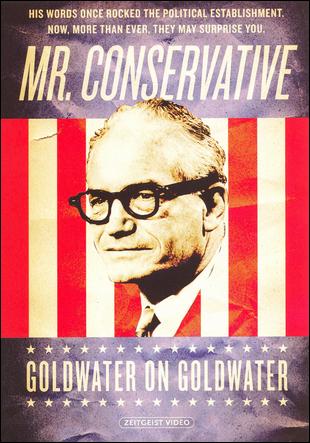 Julie Anderson and producer C.C. Goldwater (the politician's granddaughter) paint a lively portrait of Barry Goldwater, father of the conservative Republican movement, in this fascinating doc, which unlocks the surprising, often controversial positions taken by the Arizona senator after his election to office and an unsuccessful run for the White House against Lyndon B. Johnson.

Through interviews with colleagues and contemporaries like Ben Bradlee, Sandra Day O'Connor, Walter Cronkite, John McCain, and many others, Anderson portrays a man who remained steadfast in his support for libertarian fiscal policy and the Vietnam war, but who also took up the cause of civil rights and openly criticized fellow Republicans like Nixon, as well as (in his later years) the Christian Right. With his flinty sense of humor and unvarnished honesty, Goldwater sported qualities woefully missing in many of today's candidates for office. "Mr. Conservative" deserves your vote!