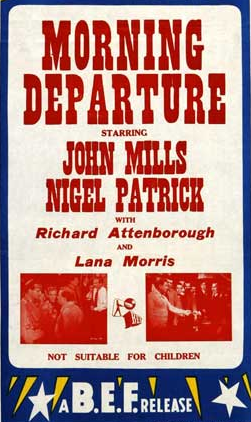 On a routine training exercise in peace time, a submarine helmed by Lt. Commander Peter Armstrong (Mills) strikes a mine and sinks to the ocean floor, trapping twelve surviving seamen aboard. Help soon arrives, and a plan is hatched to haul the marooned sub back to the surface... but with dwindling oxygen supplies, scarce food, and a panicked sailor (Attenborough), their fate is anything but certain. Armstrong’s only hope is to keep morale high, and pray that storms don’t delay the rescue.

Roy Ward Baker’s claustrophobic undersea drama, made decades before “Das Boot,” toggles back and forth between the rescue efforts topside, and the struggle for life in the depths, where a crew fights anxiety and deprivation in a crippled hunk of metal. Mills is all stiff upper lip as the ship’s level-headed, imperturbable captain, but Attenborough nearly steals the show as a sulking, selfish recruit too green around the gills to deal with the life-or-death pressure. A fine ensemble cast and suspenseful (but not overplayed) plotting distinguishes this film, a tribute to the bravery and courage of the British navy.