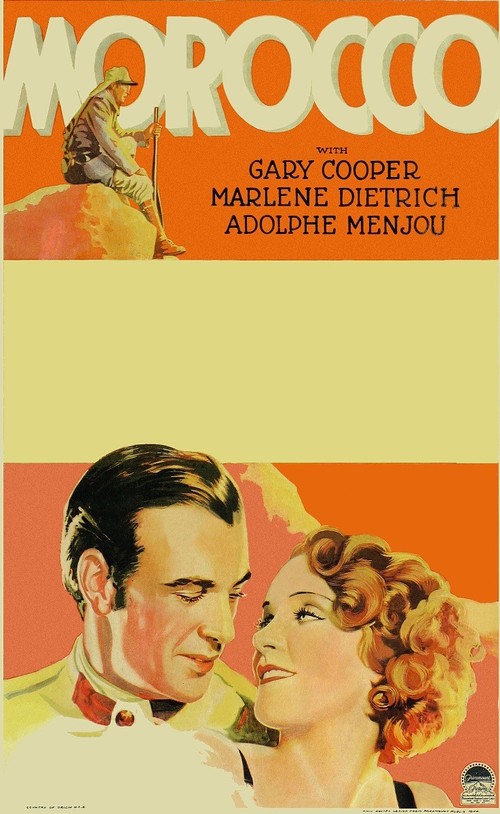 Sultry Paris nightclub singer Amy Jolly (Dietrich) heads to Morocco to perform her sensual, gender-bending cabaret act at a Mogador nightclub. There, two men fall hard for her: Tom Brown (Cooper), a Foreign Legionnaire and ladies man, and fat cat Monsieur La Bessiere (Menjou). Amy and Tom are both jaded by life but nevertheless intrigued with each other. However, when Tom gets in trouble with his superiors and La Bessiere intercedes as a favor to Amy, the cynical soldier senses Amy may marry the other man out of obligation as well as for his money. Tom abruptly decides to head back to the front, forcing Amy to choose between fortune and true love.

This Oscar-nominated drama from acclaimed director von Sternberg introduced Dietrich to American audiences (he had launched her career in Germany the previous year in “The Blue Angel"). Not surprisingly, she was an instant sensation. Donning a tuxedo and even kissing a woman in the audience — tantalizingly risqué at the time — Dietrich burns through the screen. And even though she didn't know exactly what she was saying (a non-English speaker at the time, she recited her lines phonetically), she knows just how to practice the language of love with the handsome Cooper. (They were reportedly lovers off-screen.) Sternberg lays the atmosphere on thick, making us feel the oppressive heat and lawless vibe of Mogador's underworld. If you're in the mood for a romantic getaway full of excitement and intrigue, take a trip to "Morocco."

Moscow Does Not Believe in Tears