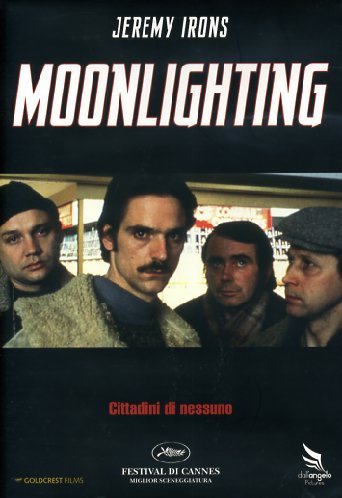 In December 1981, a four-man Polish construction crew headed by foreman Nowak (Irons) leaves its home country for London. They’ve been given some money and equipment to do an “under-the-radar” (e.g., no work permits) renovation of a Victorian flat for a rich Polish industrialist. Soon after their arrival, Nowak, the only one who speaks English, learns from the news media that a crackdown has begun on the nascent Solidarity movement in Warsaw, leading to an extended period of martial law. To keep the job on track and get paid, he must keep this dramatic development secret from the rest of his crew. But how long can he keep up the deception?

Skolimowski’s bone-dry political satire features an inspired and atypical performance from Irons, still at an early point in his career. All eyes are on his character as he pushes his team to finish, while going to increasingly comic lengths to keep this crucial information from them. Meanwhile, we observe the group’s overall sense of displacement as they’re exposed to some very strange people and customs in this foreign land. Shot quickly and urgently on a shoestring budget, this classic of Solidarity-era filmmaking is an essential and enduring document of its time.