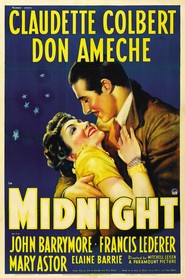 Arriving at midnight in Paris without a penny to her name, American showgirl Eve Peabody (Colbert) meets Hungarian cabbie Tibor (Ameche), who takes an instant shine to this beauty in gold lamé. Eve has other plans, though, and ditches Tibor to crash a Parisian high-society party, using his exotic-sounding surname. There, the "Baroness Czerny" meets aristocrat George Flammarion (Barrymore), who, once he learns of Eve's clever disguise, makes her an irresistible proposition.

Claudette Colbert was never better than in this Mitchell Leisen classic screwball comedy, which has lost none of its punchy wit or saucy flair with time. That has a lot to do with the cheeky script by Billy Wilder and Charles Brackett, who keep things delightfully ripe with the threat of Eve's exposure: Flammarion lures her to Versailles, where her job is to distract Jacques Picot (Francis Lederer),the playboy lover of his wife, Helene (Mary Astor). When Ameche shows up in pursuit of Colbert, the fun really begins. The impeccable plotting and cynical banter will keep you in stitches!