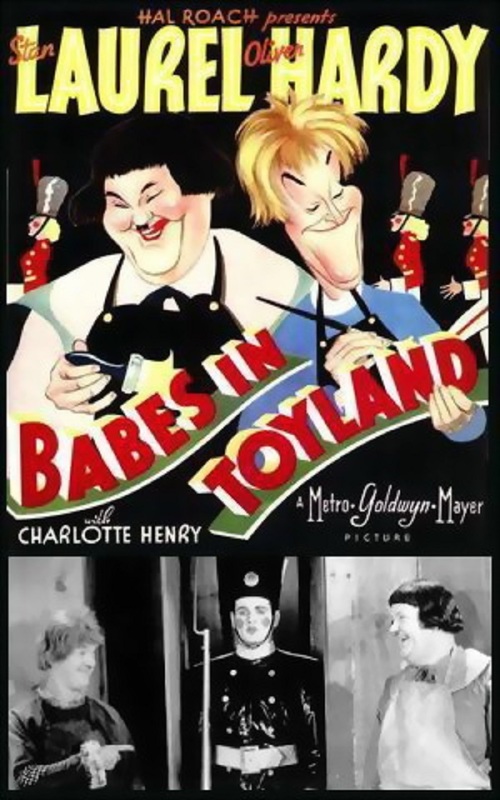 March of the Wooden Soldiers

This musical fantasy based on a Victor Herbert operetta features a variety of familiar nursery rhyme characters joining Stannie-Dum (Laurel) and Ollie-Dee (Hardy) in Toyland. Stan and Ollie are toy-making apprentices working for no less a personage than Santa himself. Meanwhile, Bo-Peep (Charlotte Henry) wants to marry Tom-Tom Piper (Felix Knight), but evil landlord Silas Barnaby threatens to foreclose on Bo-Peep's home unless she marries him. She refuses, and then Barnaby frames Tom-Tom, who gets relegated to Bogeyland. Stan and Ollie are around to stir up and then resolve several "fine messes" in the bargain, including the fate of Tom-Tom and Bo-Peep.

"March," a perennial holiday favorite produced by the legendary Hal Roach, retains its magic, thanks to a charming, refreshingly simple rendering of Toyland and its citizens, some cute songs, and the irresistible antics of Laurel and Hardy as the movie's hapless heroes. Best for smaller kids and their parents (though more suggestible tykes might get a small scare out of Bogeyland's denizens), this is a sweet movie that harkens back to a more innocent, fanciful time, while showcasing an immortal comedy team. (Note: originally released in 1934 as "Babes in Toyland," the film was later colorized, re-edited, and renamed as "March of the Wooden Soldiers.")