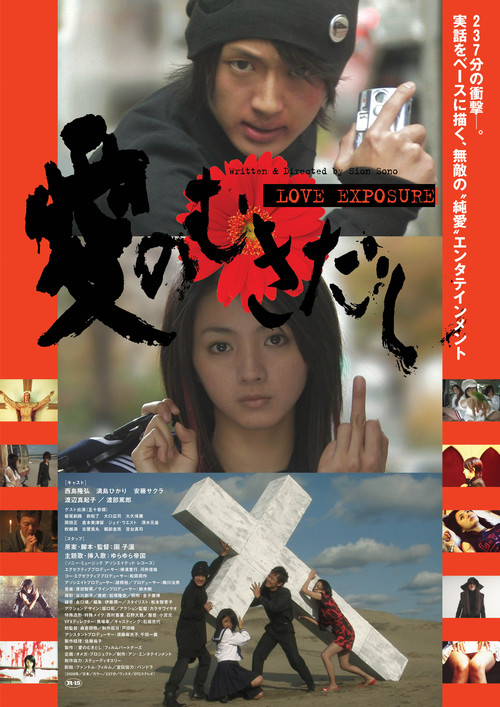 Tokyo teenager Yu (Nishijima) will do anything for the love of his zealot priest father, including committing sins to gain his attention in the confession booth. So he spends his days perfecting stealth ninja camera moves in order to steal shots up young girls' skirts. But nobody's white cotton panties enthrall him as much as Yoko's (Mitsushima), a damaged, crusading man-hater. She finds herself drawn to Yu, but only when he appears as his female alter-ego Miss Scorpion. Complicating their relationship is the devious and dangerous Koike (Ando) who is out to convert Yu's Christian family to her own twisted cult, the Zero Church.

This gleefully deranged four hour epic is a fantastical feat of style and storytelling, with director Sono drawing on 1970s martial arts films as the visual kick-off point for his tale of Original Sin, guilt, and above all, love. Yu, looking like he's jumped from the pages of a manga comic, evolves from childish schoolboy to full-on avenging angel in this shape-shifting narrative that makes time for flashback montages, feverish religious satire, and plenty of Priapic perversion. At heart it's a love story, and what better way to illustrate the raging hormones of teenagers than exaggerated metaphors about desire and divine devotion. With the best use of Ravel's "Bolero" since "10," "Love Exposure" is totally bonkers... and utterly sublime.

Love Is the Devil: Study for a Portrait of Francis Bacon