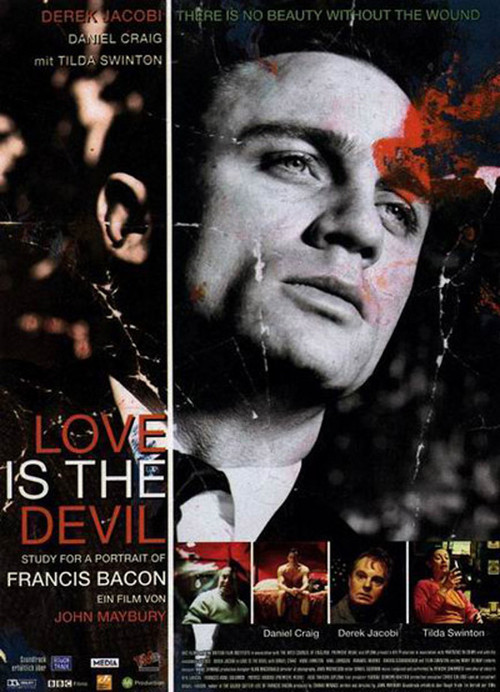 Love Is the Devil: Study for a Portrait of Francis Bacon

In 1960s London, celebrated painter Francis Bacon (Jacobi) awakens to find a very attractive burglar in his apartment. He promptly propositions him, and soon enough, small time crook George Dyer (Craig) has become his lover. Dyer’s raw sexuality and lack of sophistication enthrall Bacon, who parades him in front of his drunken, jaded cronies, including the acerbic Muriel (Swinton). Feeling used and inadequate, Dyer is plagued with nightmares and relies increasingly on alcohol and pills. As Bacon tires of his lover and muse, he ridicules and belittles him. Dyer becomes increasingly unhinged, and we can sense this will not end well.

As the subtitle suggests, this cinematic shard reveals just a fraction of the artist, mostly through this destructive relationship. Without the permission of Bacon’s estate, the filmmakers were unable to show actual Bacon paintings. Director Maybury actually works this restriction to his advantage, as he paints the movie screen with grotesque images that suggest the art itself: faces are distorted by lenses, shot from behind glass, creating a grim, disquieting effect. This fractured, untraditional biopic is anchored by Jacobi’s superb (though hardly sympathetic) portrayal of Bacon, and Craig’s tortured physicality as Dyer. For these two lost souls, love is the devil indeed.