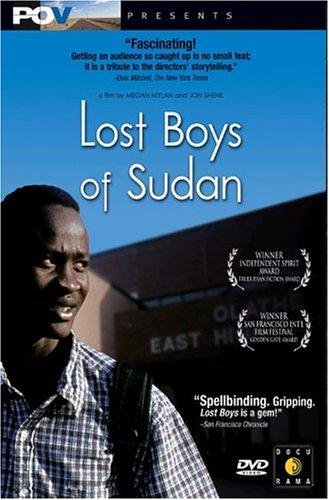 This extraordinary film trails two Sudanese youths, Santino Chuor and Peter Dut, during their first year in the United States as wards of a refugee resettlement program. Though physically distant from the violence that engulfed their home country, these war orphans now must cope with unusual customs and social expectations, not to mention the crippling isolation of being different, emotionally and physically, in a wholly alien nation.

Forced to flee the civil war engulfing their native Sudan, tribal youths Santino and Peter journeyed a thousand miles to refugee camps in neighboring Kenya, where they joined 50,000 others collectively known as "the lost boys." In this film, Shenk and Mylan observe their year-long adjustment to the American way of life, as they work, attend school, shop at supermarkets, and come to grips with a bleak past their well-meaning hosts and new friends simply can't comprehend. You'll be touched by these "Lost Boys" and their heartbreaking struggle to lead normal lives under the shadow of so much loss.