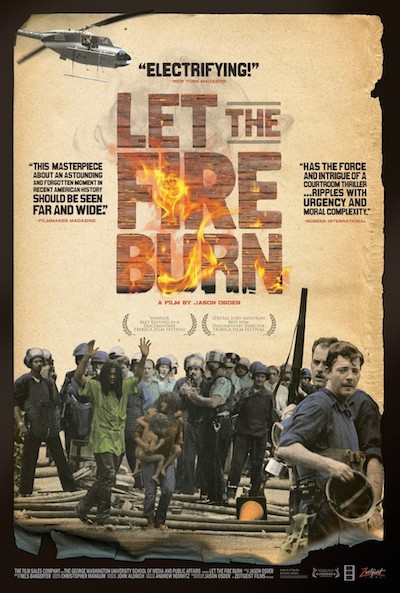 In 1978, after an incident in which a police officer was killed, nine members of the radical “back to Earth” organization MOVE were imprisoned. Relationships between the group, their militant leader John Africa and the city of Philadelphia worsened, and in 1985, tensions came to a head.  A police helicopter dropped an explosive device on the house where the members were holed up, and a decision was made to let the ensuing fire burn. As a result, 61 homes were destroyed and eleven lives were lost in the inferno.

Using only archival footage from television news crews, video excerpts from the public hearing that followed the incident and the deposition of Birdie (aka Michael Moses Ward), the only surviving child, director Osder builds up a searing indictment of the local authorities who allowed this tragedy to happen. It’s pretty clear that their responses revealed more than a tinge of racism. At the same time, we come to recognize how MOVE’s violent rhetoric and cult-like aspects could have been deeply threatening to the powers-that-be. With a shattered child providing the emotional core, this award-winning documentary is gripping evidence of a little-known but nevertheless horrific occurrence in America’s past.

Let the Right One In