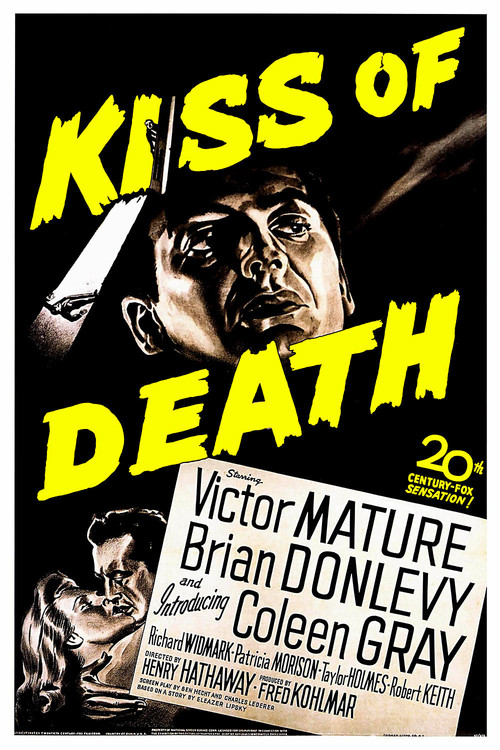 Pinched in a Manhattan jewelry heist, Joe Bianco (Mature) faces a tough choice: he can rat out his accomplices to assistant district attorney D'Angelo (Donlevy), or spend 15 to 20 in the clink, far from his two young daughters. Joe loves his family, but he's no stool pigeon, and elects to do the time. But after a tragic event, he changes his mind and makes parole. Joe settles into a quiet, honest life with his new wife, Nettie (Gray), until a vicious mobster he testified against, Tom Udo (Widmark), is unexpectedly released, forcing him to meet the threat head-on.

Scripted by Ben Hecht and Charles Lederer, this taut gangster thriller is chilling and literate, with consummate performances by Mature (at his dour best as unwilling squealer Bianco) and co-stars Donlevy, Gray, and a young Karl Malden. But the film is best remembered for launching the career of Richard Widmark, never creepier than he is here, playing a sadistic criminal with a cackling, fearsome laugh. Hathaway handles the noir elements with expert attention to detail, including filming the stark action on-location in 1940s New York City. For a gritty, hard-hitting crime drama, pucker up for "Kiss of Death."

Kiss of the Spider Woman