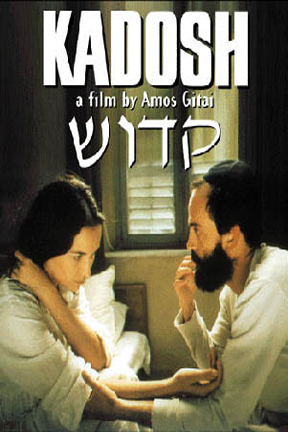 Orthodox Jew Meir (Hattab) lives in the Mea Shearim district of Jerusalem with his beloved yet barren wife of 10 years, Rivka (Abecassis). Citing the Talmud's injunction to procreate, the rabbi pressures Meir to repudiate her and take another woman as his spouse. Meanwhile, Rivka's younger sister Malka (Meital Barda) is due to wed fanatical Yossuf (Uri Ran Lauzner) in an arranged marriage, though her heart belongs to Yacub (Sami Hori), a soulful songwriter who's been rejected by the community for questioning doctrine.

A beautifully realized and sensitive drama, Amos Gitai's controversial "Kadosh" observes a little-seen religious community where women's roles are severely restricted to child-bearing and strict obedience to their husbands. Love is both triumphant and tragic in Gitai's story, the ultimate cause of dark disruptions. Abecassis and Hattab inhabit their roles with deep feeling, making us believe in their mutual respect and reverence for tradition. Barda is also wonderful as the younger woman whose need for escape materializes when her new husband proves incapable of warmth or tenderness. Somber yet hopeful, "Kadosh" is a marvelous Israeli gem.