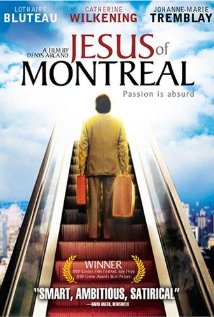 Wanting to modernize a long-running Passion Play in his Montreal parish so it will be relevant to a wider audience, Catholic priest Father Le Clerc (Pelletier) hires Daniel (Bluteau), an intense young actor, to mount a new production. Daniel researches his role as Christ, gathers a motley cast of veteran players, and mounts a daring and provocative re-telling of the Biblical tale that horrifies Le Clerc, but becomes a smash hit in Quebec.

Quebecois director Arcand is known for intelligent and stimulating films like "Montreal," which broaches a controversial subject — the historical accuracy of Christ's crucifixion and the true message of his teachings — with flair. Bluteau is a charismatic presence, as is the marvelous Wilkening, playing the Mary Magdalene character. But it is more than a backstage drama: Daniel's quest to find his actors mirrors that of Jesus to find his disciples; in fact, life imitates religious art in many thought-provoking ways throughout "Montreal." Arcand finds plenty of opportunities to critique modern life, too, while staging "the greatest story ever told."