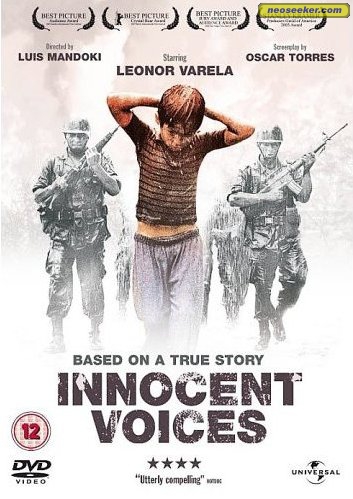 In small-town El Salvador in the mid '80s, battles are raging between government troops and leftist rebels, and 11-year-old Chava (Padilla), who lives with his mother (Vadela) and sister, soon will be old enough for recruitment into the military. Chava witnesses the danger and brutality of the civil war firsthand, and must come to terms with becoming fodder for the guerrillas, or joining them.

A stirring, child’s-eye glimpse of the war in El Salvador that claimed thousands of too-young lives during the Reagan era, Mandoki’s poignant story of a frail innocent caught in the crossfire still speaks to us today, when child soldiers are deployed in places like Sudan, Iran, and Southeast Asia. Written by Oscar Torres, and based on his own real-life experiences, “Voices” brings an earnest, almost verité feel to documenting the odyssey of a reluctant combatant, and the conflict that engulfs him in the war zone. There is light at the end of the long day’s journey, though; Torres is living proof of that.