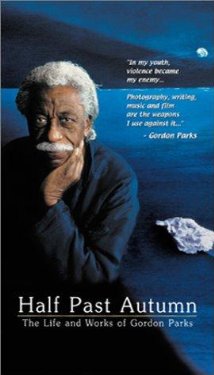 An authentic modern-day Renaissance man, as an artist Gordon Parks was as prolific as he was passionate. Filmmaker, painter, poet, novelist, music composer, and photographer, Parks made an impact across all these disciplines (though his photography represents perhaps his richest legacy). "Autumn" follows the life and career of this poor sharecropper's son, from his birth in the far-off Kansas City of 1912, through his meteoric rise as the first black photographer for magazines like Vogue and Life in the forties and fifties, and culminating in his later years when he pursued filmmaking and discovered music composition.

HBO's fascinating "Half Past Autumn" depicts Parks as an inspiring, charismatic artist whose work (in particular his photojournalism) sought to improve the human condition. We discover how Parks rescued and virtually adopted a malnourished Brazilian boy named Flavio, who'd been the subject of a widely publicized photo essay Parks had initiated. We learn of his intimate connection with the civil rights movement, and we hear about the man's personal side from ex-wives, children, and close friend Gloria Vanderbilt. In all, it's a warm and wonderful tribute to an artistic life, most fully lived.