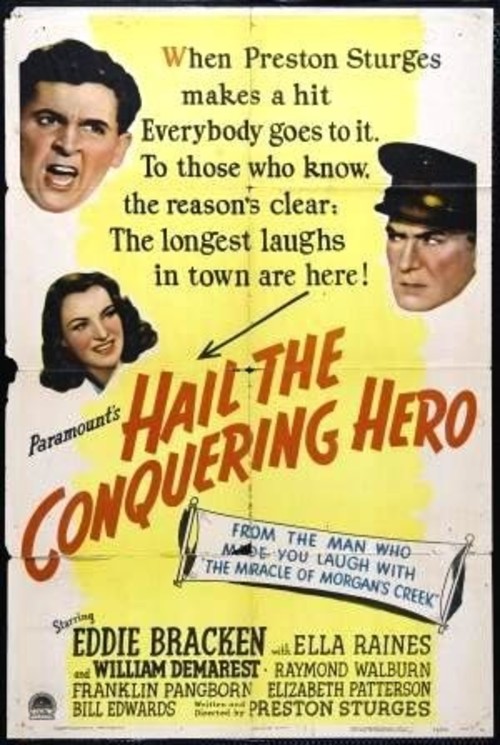 After Woodrow Lafayette Pershing Truesmith (Bracken) is discharged from the military during WWII for chronic hay fever, he’s too embarrassed to return to his hometown and face his mother. One night, he buys some drinks for six Marines just back from Guadalcanal who convince him on the spot to call his mom and tell her he was wounded in battle and is stateside, en-route to see her (along with his fellow battle-hardened veterans). When Woodrow’s old neighbors roll out the brass bands to greet his homecoming, and eventually push the young hero to run for mayor, we sense it’ll only be a matter of time before the truth comes out.

This zany comic gem from the legendary Preston Sturges veritably zips along thanks to the director’s sharp, Academy Award–nominated screenplay and a host of winningly wacky performances, with eternally befuddled milquetoast Bracken and gruff Marine sergeant Demarest particular stand-outs. A razor-sharp satire on patriotism and politics, most everything and everyone onscreen is poked fun at, but it’s all done with considerable affection and good humor. “All Hail” this heroically hilarious comedy, which has been missing in action far too long.

Hale County This Morning, This Evening