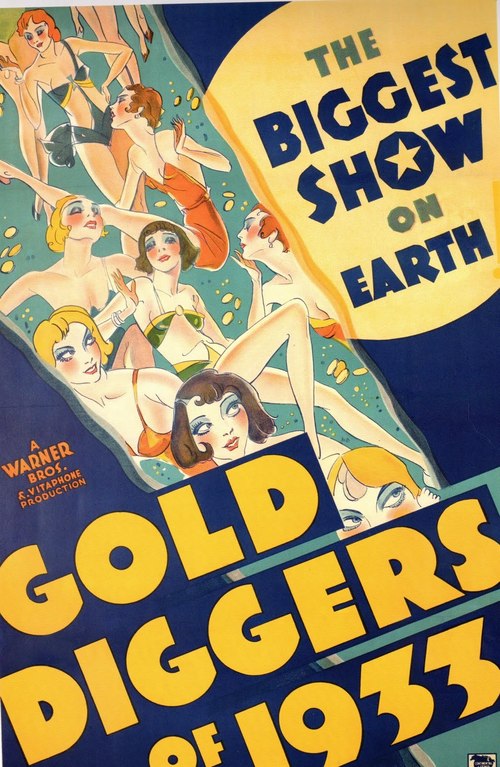 In the pit of the Depression, songwriter/crooner Brad Roberts (Powell) mysteriously finds a way to fund a Broadway extravaganza, showcasing his own music and providing jobs for struggling showgirls Carol (Blondell), Trixie (McMahon) and ingénue Polly Parker (Keeler), whom Brad loves. When the show's a hit, it's revealed that Brad is actually Boston blue-blood Robert Bradford, whose family condemns any connection with show business. Responsible elder brother J. Lawrence Bradford (William) and family lawyer Faneul Peabody (Kibbee) get dispatched to New York to straighten out matters. The frosty elder Bradford soon melts under Carol's charms, while the hapless Peabody falls under Trixie's spell. At this point, all bets are off.

In this first "Gold Diggers" entry, the various romantic maneuverings may seem a trifle dated and silly, but they also reveal the charged dynamics between the few "haves" and the many "have-nots" during our country's worst economic crisis. We see the rich, oblivious Bostonians brazenly manipulated by the sassy, savvy chorus girls, who aren't mean or dishonest — just plain hungry for a good meal. Busby Berkeley's risqué, jaw-dropping production numbers still transport us from our troubles, as they did back then, and immortal Harry Warren/Al Dubin songs like "We're In The Money" still enchant and inspire. This "Gold" sparkles.