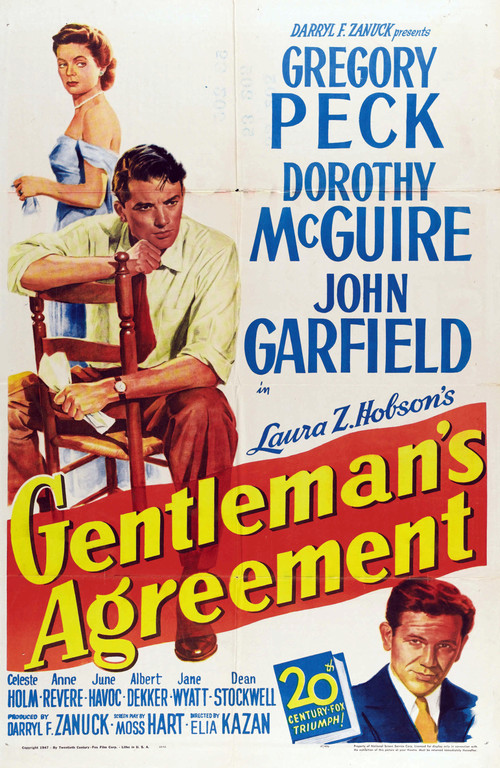 Asked by progressive-minded magazine publisher John Minify (Dekker) to write an exposé series on anti-Semitism, widowed journalist Phil Green (Peck) decides to up the ante by posing as a Jew, enduring unexpectedly cruel prejudice on job interviews, at public toilets, and in social situations. Over time, the stress of his assignment takes a toll on his budding romance with Kathy (McGuire), Minify’s niece, and even provokes an ugly incident involving his son Tommy (Stockwell).

A risky venture for Fox producer Daryl F. Zanuck, whose decision to fund an issue film about the unspoken scourge of bigotry against Jews could easily have backfired in a country that still hadn’t adopted meaningful civil-rights legislation, “Gentleman’s Agreement” was a hit with critics — and also the Academy, who bestowed it with a Best Picture Oscar. Peck was an ideal choice for the role of Green, and John Garfield offered a winning turn as Dave, his lifelong Jewish friend and confidante. In his third outing as a film director, Elia Kazan (“On the Waterfront”) proved he was equal to the material, investing Oscar nominee Moss Hart’s screenplay with a seriousness of purpose as well as dramatic heft.