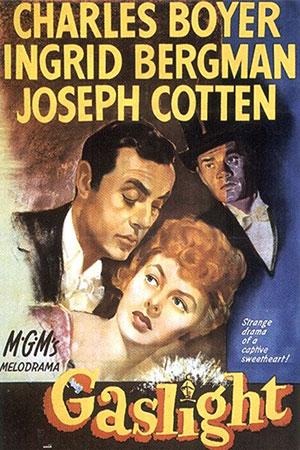 In Victorian era Europe, wealthy heiress Paula Alquist (Bergman) settles into her long-abandoned childhood home in London, accompanied by new husband Gregory Anton (Boyer). It's not long before valuable items start to go missing, and Gregory starts to show his cruel side: he accuses Paula first of losing her memory, then her mind. Fortunately, Scotland Yard detective Brian Cameron (Cotten) senses that something nefarious is going on, and quietly investigates. But can he discover the truth before Paula suffers irreparable harm?

This lavish, eerie remake of the 1940 British psychological thriller is fully worthy of its predecessor, thanks to the wily interventions of MGM head Louis B. Mayer, who oversaw the production. The Oscar-winning Bergman is a vision of fragile beauty as Paula, a socialite who has every reason to feel troubled. Anton, a schemer who's obviously wed Paula for ulterior motives, is played with sinister aplomb by Boyer. Still, one of the greatest pleasures of this Gothic melodrama is witnessing the tart-tongued debut of Angela Lansbury, playing Boyer's flinty, flirtatious young maid. By all means, turn up this "Gaslight."