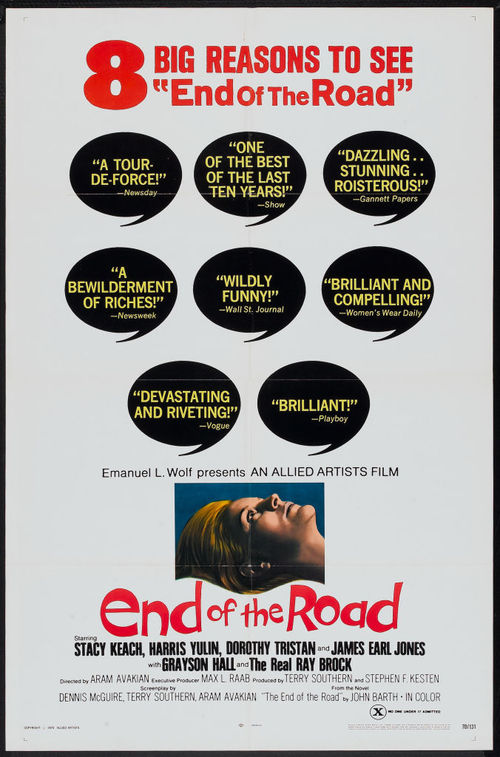 End of the Road

After graduating from college, Jacob Horner (Keach) falls into a catatonic state on a railway platform, his head awhirl with images of atrocities and horror. Discovered by Doctor D (Jones), he is taken to an insane asylum called "The Farm" where the doctor's unorthodox practices bring Jacob back to a (relatively) normal state. Jacob then gets a job teaching at a local college where he befriends fellow professor Joe (Yulin) and his pretty wife Rennie (Tristan), to whom Jacob is immediately attracted. Will this budding relationship cause a relapse?

Avakian's surreal work mirrors its period of nearly unprecedented political, social and moral turmoil, reinforced by jagged editing and a pastiche of styles and tones. Throughout, Keach's Jacob presents the anguished face of suppressed rage, while Jones's wicked performance as the mad scientist suggests all the liberating, free-form questioning of the counter-culture movement. Adapted from John Barth's novel by satirist Terry Southern ("Dr. Strangelove"), the film was originally given an X rating due to its depiction of bestiality and a graphic abortion scene. Featuring a jangled, jazzy score and cinematography by first-timer Gordon Willis, this freaky Godardian exercise is certainly not for everyone, but fans of avant-garde cinema should definitely travel to the "End Of The Road."