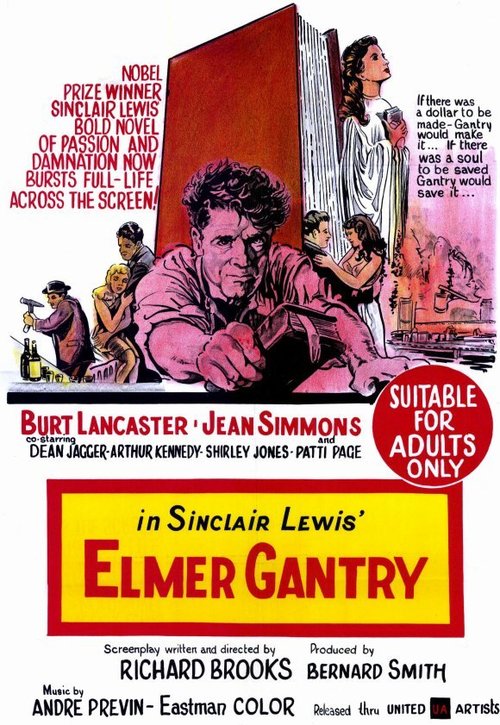 Hiding his dissolute leanings, charismatic street preacher Elmer Gantry (Lancaster) teams up with touring tent revivalist Sister Sharon Falconer (Simmons) to spread the word of God, and before long the two are making money hand over fist. Falconer falls in love with Gantry, and with her new spoils, builds an enormous house of worship by the ocean. But the mercurial minister's womanizing past is about to revisit them in the person of Lulu (Jones), a jilted prostitute out for a little payback.

Based on the bestselling novel by Sinclair Lewis, this tale of a lustful, larger-than-life charlatan's fall from grace owes its strength to the force of Lancaster's dynamic, Oscar-winning performance. His “Gantry” preaches hellfire and brimstone, but loves life — and women — with a hearty gusto that is as pure as Sister Falconer's vanity is unbecoming. Jones also took home an Oscar, playing against type in a sultry turn as a minister's “fallen” daughter who became Gantry's lover. Also great is Arthur Kennedy as an atheist journalist modeled on the legendary H.L. Mencken. Fiery and sharp, Richard Brooks' satirical take on Bible-thumping hypocrisy and hucksterism still speaks volumes in today's world.

Elvis: That's the Way It Is