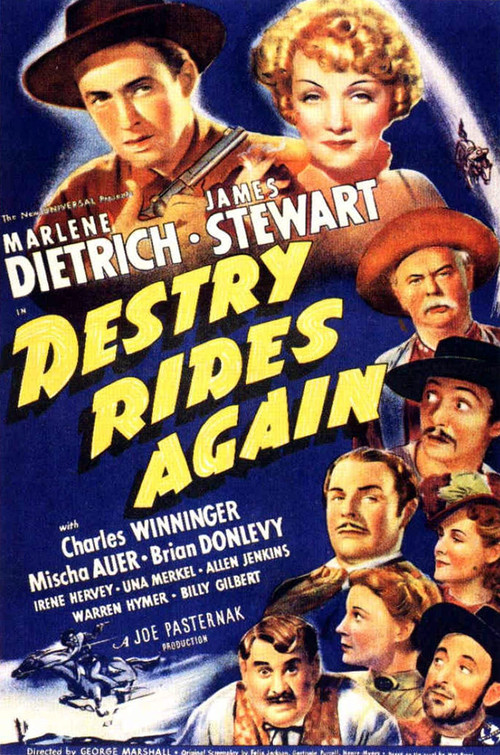 The corrupt Kent (Donlevy) unofficially rules the western town of Bottleneck, and when the Sheriff's job comes open, hires the town tippler (Winninger) to fill it. Unfortunately for Kent, the drunk sobers up long enough to hire a young man named Destry (Stewart) as his deputy. Destry's a lawman with a difference — he doesn't wear a gun! Still, the new deputy makes his presence felt, challenging Kent's authority and even getting a rise out of saloon-girl Frenchy (Dietrich), who is one lady you don't want to mess with.

This contagious Western comedy features Stewart at his most appealing, and Dietrich is also in her element, belting out the famous "The Boys In The Back Room." It's also hard to top wily Donlevy as the bad guy, and Mischa Auer is a scream as the sheriff's brother-in-law, one Boris Callahan. George Marshall's smooth direction and Gertrude Purcell's supremely clever script round out this winning film. (Trivia note for more casual viewers: this picture helped inspire "Blazing Saddles!")