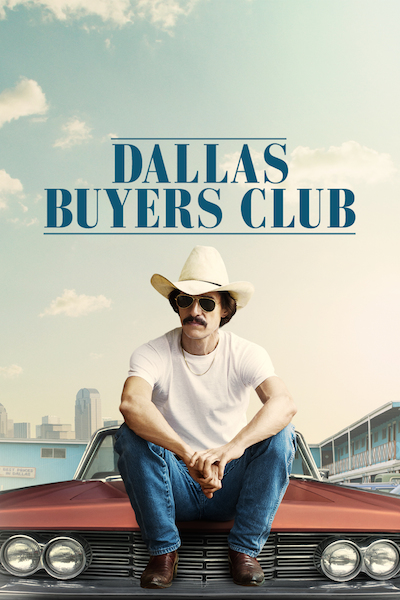 In 1985, hard-living electrician Ron Woodroof (McConaughey) is diagnosed with HIV. A proud and promiscuous heterosexual (and unabashed homophobe), at first he refuses to believe he could have a “homosexual disease”. His redneck pals now shunning him, Ron gets more bad news when his doctors tell him he has just 30 days to live. With the medical establishment hamstrung by a slow-moving FDA, Ron seeks alternative treatment from a renegade doctor (Dunne) down in Mexico. Together with Rayon (Leto), a transgender AIDS patient he meets in the hospital, he starts smuggling in and selling non-approved drugs out of a Dallas motel room. Suddenly, as Ron is fighting for his life, he finds a new one.

Inspired by the true story of rodeo cowboy Woodroof, this compelling drama captures a unique instance when self-interest intersected with medical activism. McConaughey’s nuanced Oscar winning performance exposes the gradual softening of Woodroof’s outlook, and we totally buy his transformation. Leto, who also took home an Oscar, takes a clichéd character, the tragic drag queen with the heart of gold, and turns his Rayon into the emotional crux of the film. Both actors lost huge amounts of weight for this film, but their raw, heartfelt performances don’t rely on their surface appearance. Are you in search of a deeply human, fiercely told tale? Join this “Club.”