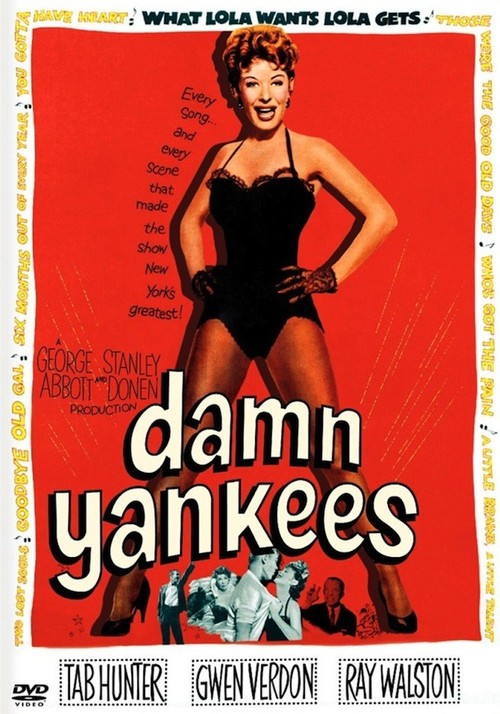 Desperate for his beloved Washington Senators to win a pennant, aging baseball nut Joe Boyd (Robert Schafer) makes a deal with Applegate, aka the Devil (Walston), and is transformed into Shoeless Joe Hardy (Hunter), a top-notch slugger with a miraculous batting average who could take the sagging Senators all the way. But when Joe tries to bag out of the soul swap using an escape clause, Applegate sends in a game-winning reinforcement: the luscious, irresistible seductress Lola (Verdon).

A diverting, tarted-up goof on the scandalous 1919 World Series thrown by "Shoeless" Joe Jackson (among others), Abbott and Donen's rousing "Yankees" reunites the graceful Verdon (a flaming redhead, of course!) and mordant Walston from the hit Broadway play. This ballgame is all about entertainment: Verdon belts out Richard Adler and Jerry Ross's splendid songs, like "Whatever Lola Wants" and "Heart," with jazzy authority, while Bob Fosse's vibrant choreography gives her sinfully muscular body a sizzling workout. They don't make 'em like they used to, baseball fans!