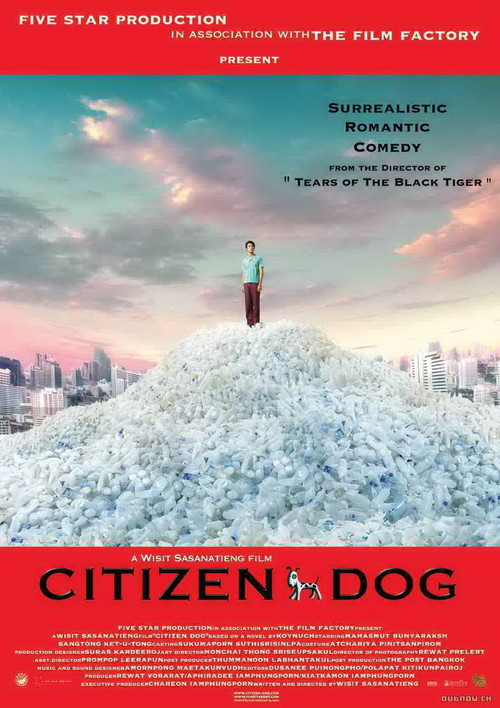 Against his grandmother's wishes, Pod (Boonyaruk), a naïve, aimless boy from the country, moves to the big city and takes a job working in a sardine canning factory. A machine mishap cuts off his finger and lands the digit in a sardine tin, sending the boy on a journey through the city's supermarkets to find it. After leaving the factory, he becomes a security guard for a large company. There he meets Jin (Gate-Uthong), an obsessive/compulsive maid with a wild imagination, who carries around a white book written in a foreign language that she dreams of learning to decipher. This odd, unlikely couple then embark on a fanciful, magic-filled romance, replete with twists and turns, and set against a surrealistic vision of Bangkok.

Simply relating the basic boy-meets-girl plot of "Citizen Dog" cannot capture the wonder of this truly magical, one-of-a-kind film. "Dog" evokes a world where anything can happen, and does — from teddy bears coming to life, to humans growing tails — and Sasanatieng's wild visual imagination and inventive special effects make it all enchanting. Little wonder then that this feature won the Thai equivalent of an Oscar for visual effects. More than that, this film's crowning virtue lies in how all the visual trickery enhances, rather than detracts from, its winsome central romance.