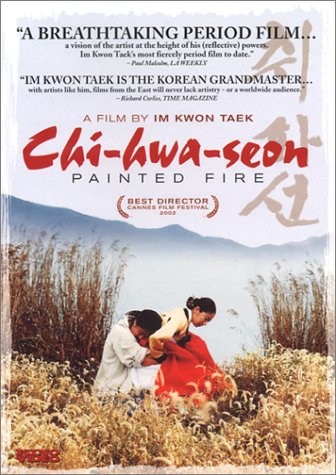 In the mid-19th-century, Oh-won (Min-sik) is born a peasant in the Korean provinces, but his natural artistic ability soon allows him to escape a life of misery. Apprenticed to a well-known calligraphy teacher, Oh-won earns a name for himself for his flawless imitations of Chinese masterworks; and he eventually falls for beautiful Mae-hyang (Ho-Jeong), whom he is prevented from marrying due to his low birth. As the turbulent social and political circumstances in Korea upend the ruling classes, the hard-drinking, iconoclastic Oh-won perseveres on his own terms, gaining notoriety for his exploits and much-sought-after artworks.

Directed by the great living legend of Korean cinema, "Painted Fire" tells the tempestuous life story of Oh-won, one of the most famous artists of his time. Played with bombastic, larger-than-life ferocity by Choi Min-sik (of "Oldboy" fame), Oh-won is a tortured, raging alcoholic and inveterate wanderer who's cursed by his humble beginnings but blessed with an unnatural aesthetic talent that helps him survive and prosper in the tumult of the Chosun dynasty. Im's portrait of this restless, passionate spirit is also a masterwork of period filmmaking, boasting extravagant costumes and rich, earthy cinematography.