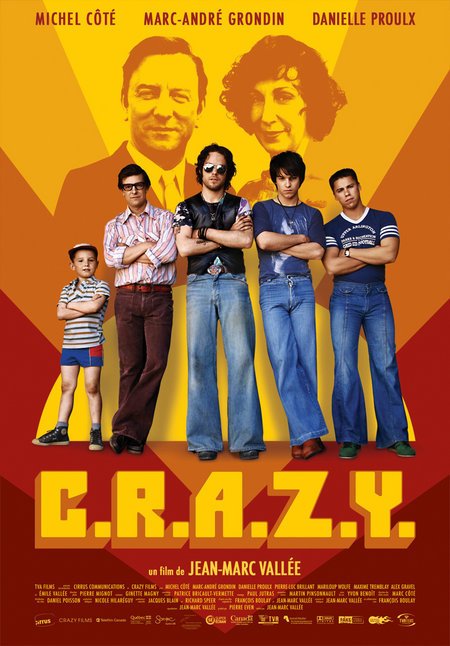 Born on Christmas Day to a Catholic family in Montreal, Zachary Beaulieu (Grondin) enjoys the fawning attention of his working-class father (Cote) as a youth, but senses early on that he's different from his two older brothers, as does a psychic friend of his mother's. In his teen years, Zach turns rebellious, further alienating his father with his music, hair, clothes, and most contentiously--his sexual confusion. As good times and bad visit the entire Beaulieu clan, Zach learns to cope with self-doubt, and the weakness of a father who refuses to accept him.

Set in the 1970s, "C.R.A.Z.Y." is a funny, touching, revelatory drama about a dysfunctional family and the growing pains of a teenager tormented by his burgeoning bisexuality. As played by Grondin, Zach is an outsider in his own family, a devotee of David Bowie with a stylish flair for fashion and hip rock music who's fighting a losing battle with all the testosterone in his home, represented by his homophobic dad and bullying, drug-addicted older brother, Raymond (Pierre-Luc Brillant). Vallee brings a lot of humor and tenderness to his character-driven drama, while orchestrating an array of conflicts that have a gut-wrenching, true-to-life feel.