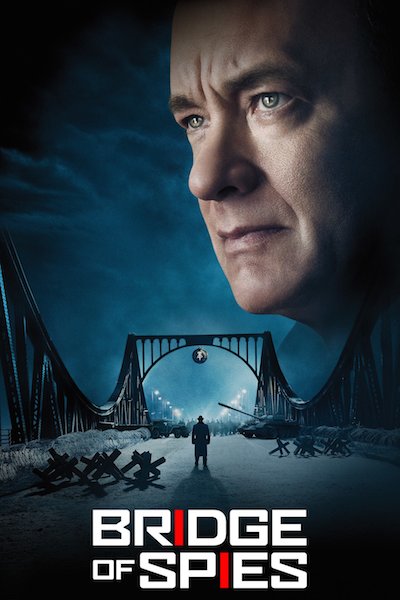 In 1957, the FBI arrests Rudolf Abel (Rylance) under suspicion of spying for the Soviets. To give the appearance of a fair trial, James Donovan (Hanks), a former Nuremburg prosecutor, is assigned to his defense. Abel is found guilty, but Donovan convinces the judge to keep his client alive as a future bargaining chip. When a U-2 fighter pilot goes down over Russia, and a young American student is imprisoned in East Berlin, Donovan has the leverage he needs to negotiate the return of the U.S. citizens — or does he?

Spielberg’s sweeping, fact-based saga of a decent man doing the right thing under highly challenging circumstances is classic cinema for contemporary times. Hanks, building on the cinematic tradition of Spielberg heroes Oskar Schindler and Abraham Lincoln, imbues Donovan with humanity and clear-eyed determination. Rylance deservedly won a supporting actor Oscar for his grounded, restrained portrayal of Abel. Elegantly mounted, smart, and tense, this period thriller is yet another Spielberg winner.