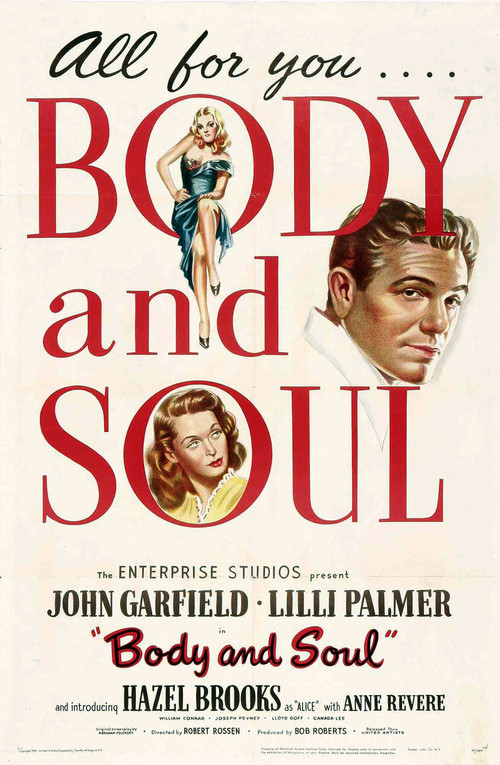 This bruising morality tale concerns the changing fortunes of Charley Davis (Garfield), a scrappy, East Side kid who makes good as a pro boxer with help from perceptive manager Quinn (Conrad). However, as Davis climbs the ladder of success in the ring, cozying up to the mob and wasting himself on booze and women, he begins to see that his life has veered in the wrong direction. With everything on the line, he fights one last bout for honor.

A noirish boxing film set on the mean streets of New York, "Body and Soul" — penned by blacklisted Abraham Polonsky — is actually a story of about the sullying of sport with "money," the film's true subject. Davis's dramatic twelfth-hour struggle to regain his integrity in the face of underworld corruption is the culmination of this tension — and the fight scenes, which Scorsese modeled for "Raging Bull," are memorably gritty. Tightly photographed by master filmmaker James Wong Howe and edited to riveting effect, Rossen's mix of suspense and social critique rides high on Garfield's bullish, knockout performance. Don't miss it!