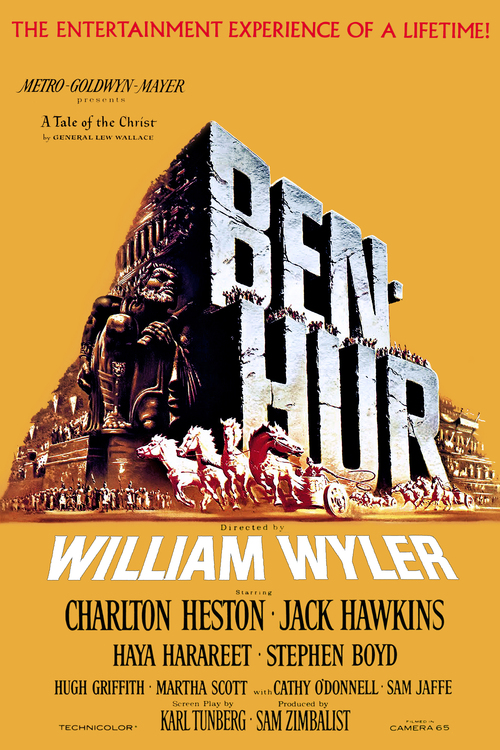 In the first century A.D., at a time when Jesus Christ is roaming Palestine spreading radical new teachings, Jewish prince Judah Ben-Hur (Heston) and his family are living comfortably in Judea. But when Ben-Hur refuses to assist his childhood friend Massala (Boyd), now an ambitious Roman politician, in the rounding up of imperial dissidents, Massala frames him for murder. Robbed of his life and liberties, and enslaved on a galley ship, Ben-Hur embarks on a lifelong odyssey of vengeance against his malefactor.

One of MGM's finest widescreen spectacles, involving thousands of extras, over 300 sets (including a life-size replica of a Roman hippodrome), and a cadre of stunt coordinators, this massive production nearly bankrupted the studio when first produced. But the payoff was equally grand: Heston's Oscar-winning performance and a hefty box-office gross validated the costs of operating on such a vast canvas. It is also epic filmmaking at its best, featuring a mesmerizing escape at sea and the most thrilling, heart-poundingly authentic chariot race ever seen on film — clocking in at 20 minutes, no less! Majestic in scale, yet sensitive in its portrayal of a vengeful man touched by his encounters with Christ, "Ben-Hur" is a monumental entertainment directed with unwavering commitment and faultless taste by old pro William Wyler.

Berkeley in the Sixties