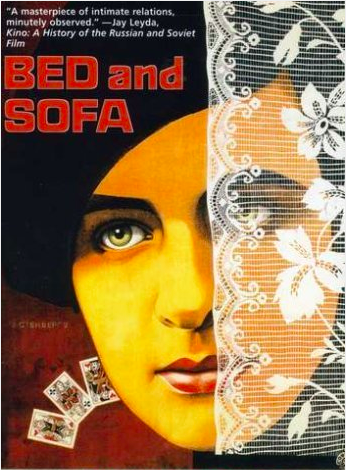 During the infancy of the Soviet Union in the 1920s, Kolia (Batalov) and his wife Liuda (Semyonova) live together in a small Moscow apartment. With the city experiencing a housing shortage, the authorities tell the couple they must take in a lodger, but luckily Volodia (Fogel), an old friend of Kolia's, has arrived in the city and needs a place to stay. Kolia heads out of town for business and returns to find that Liuda and Volodia have begun an affair. After some discussion, the three decide to continue living together in a more open arrangement. Will they be able to sustain this ménage a trois?

This saucy Russian farce is a fascinating curio, atypical of the propaganda-fueled cinema of the day, and well ahead of its time in its treatment of sex and gender. The three leads all deliver winning performances, with Semonyova a standout in a female role that was highly progressive for the time. "Bed" also benefits from inventive camerawork, yielding vivid depictions of 1920s Moscow and its inhabitants. Movie lovers, and fans of Russian cinema in particular, should curl up in this "Bed." (Note: as a bonus, the DVD also includes 1925's "Chess Fever," an amusing short profiling Russia's fixation with chess.)