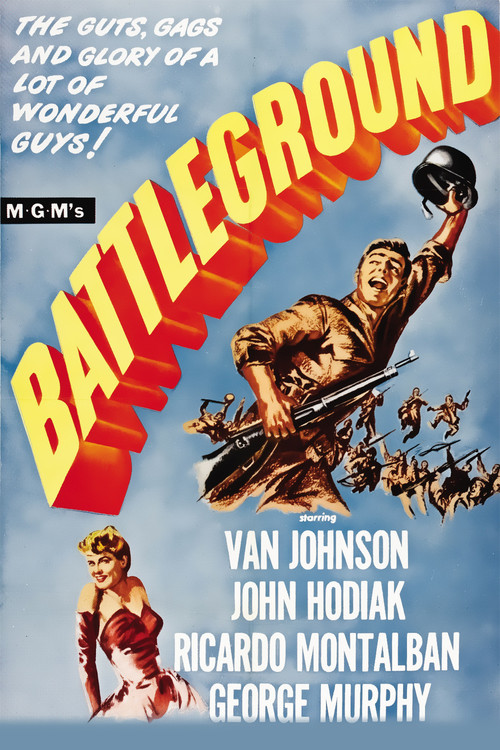 A small detail of foot soldiers from the 101st Airborne – including wisecracking GI Holley (Johnson), journalist-turned-soldier Jarvess (Hodiak), and Mexican-American Roderigues (Montalban) – holes up for one hellish winter in Bastogne, Belgium, where they're trapped trying to repel German troops. Fighting the enemy proves hard enough, but these hardy grunts face an epic struggle with the elements, too.

Winner of two Oscars and an unexpected box-office triumph for MGM in 1949, Wellman's gritty, unglamorized story of WWII's pivotal Battle of the Bulge takes an on-the-ground, soldier's-eye view of this crucial turning point in the war, telling the stories of a battery of GIs representing a cross-section of American society. Johnson, Hodiak, and Montalban are terrific in their respective everyman roles, but James Whitmore – playing a tough-as-nails sergeant with bloodied, frozen feet-steals every scene he's in. Written by Bulge survivor Robert Pirosh, "Battleground" was produced by Dore Schary against the wishes of legendary honcho Louis B. Mayer, who would soon be forced out of MGM.