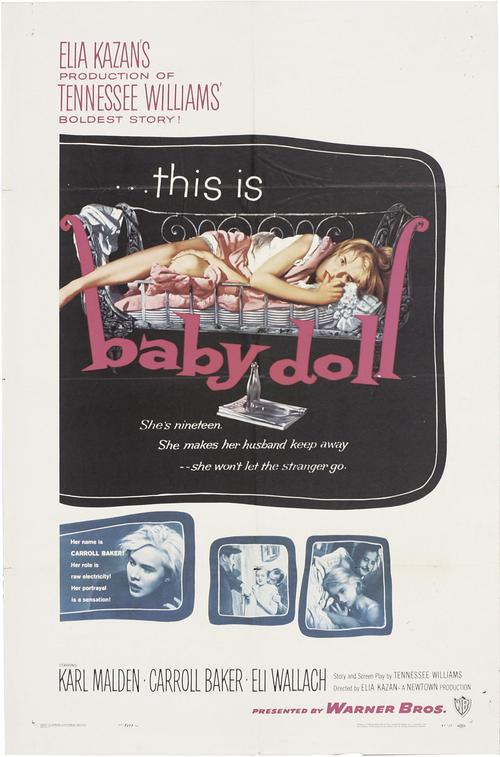 In the Deep South, glum-faced cotton-gin proprietor Archie (Malden) is married to coy, dim-witted teenage nymph Baby Doll (Baker), who sleeps in a crib, sucks her thumb, and refuses to yield her virginity to her husband until her 20th birthday. When wily Sicilian rival Silva Vaccaro (Wallach, a Broadway veteran in his film debut) arrives with plans to take over Archie's business - and his lovely young wife - Archie's insecurities turn quickly into raging, desperate acts of jealousy.

Notorious in its time as the filthiest picture ever made, this steamy, depraved black comedy from the poison pen of Tennessee Williams is expertly handled by Kazan, who had the picture shot in crisp, stark black-and-white. Malden's disturbing portrayal of cuckold-to-be Archie is a far cry from his later TV stint on "Streets of San Francisco," believe me. But also see it for a wonderfully sleazy Wallach, and the Oscar-nominated Baker, who scores as manipulative coquette “Baby Doll,” especially in a porch-swing scene with the lusty Silva. One of Kazan's trashiest efforts - in the best sense.

Back to the Future