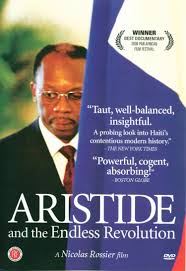 Aristide and the Endless Revolution

Was exiled Haitian leader Jean-Bertrand Aristide, the first democratically elected president in that Caribbean country's history, the victim of an internationally financed coup d'etat? Or, as officials from the Bush and Chirac governments claim, did his mismanagement of power crumble Haiti's economy and allow a group of 200 armed thugs to oust him? Rossier draws a bead on the beleaguered island nation in this fascinating political documentary.

Aristide appears throughout this eye-opening film, explaining the circumstances in which he was "kidnapped" by U.S. marines and forced to leave his home under duress on Feb. 29, 2004. Once a popular priest, Aristide twice won Haiti's top spot, running on the popular Lavalla ticket, which represented the country's poorest and most voiceless class. In his lawyerly view, Aristide was yet another casualty of powerful elite interests mobilizing military action against a progressive popular movement in the Americas. An impressive array of talking heads (Chomsky, California Rep. Waters) discuss Haiti's fraught relations with France, the reasons for its violence and extreme poverty, and Aristide's still tenacious legacy.