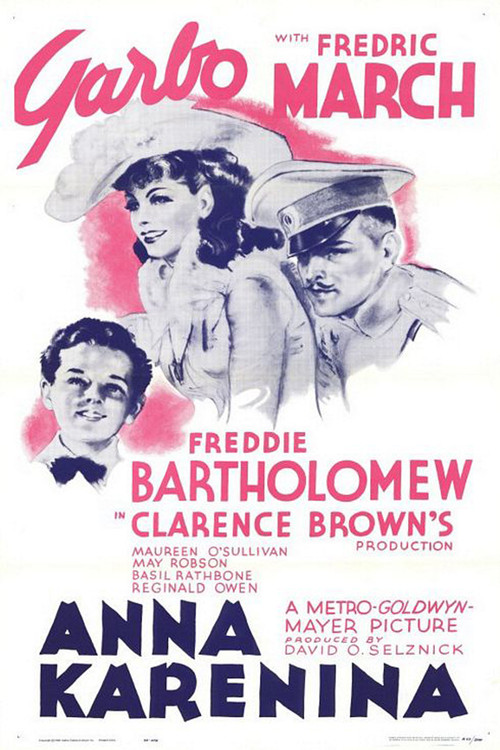 Caught in a loveless marriage to the cold, formal Karenin (Rathbone), the stunning Anna Karenina (Garbo) is in a vulnerable state as she travels by train to Moscow to visit her brother’s family. There, she meets the dashing Count Vronsky (March), a career officer, who immediately falls for her. Fighting her feelings, she returns to St. Petersburg, but Vronsky, undeterred, catches the same train. Anna soon realizes this sudden, obsessive love may cause her to lose everything, including her beloved little boy, Sergei (Bartholemew), but she seems powerless to control her feelings.

Leo Tolstoy’s epic romance, though significantly condensed, makes a fitting subject for this glossy, glamorous MGM film adaptation. Garbo, the studio’s biggest female star at the time, is perfectly suited to play the tragic heroine (in fact, this was a re-make of 1927’s “Love,” in which she essayed the same role opposite John Gilbert). Eight years later, with sound thrown in, she is only more mesmerizing. Sporting a pencil moustache, March assumes the Vronsky role with conviction and the requisite ardor, while Rathbone scores in a steely turn as the wronged husband. If you’re looking for a living example of what the top studio in Hollywood could produce during its Golden Age, check out the literate and sumptuous “Anna Karenina.”

Anna and the King of Siam