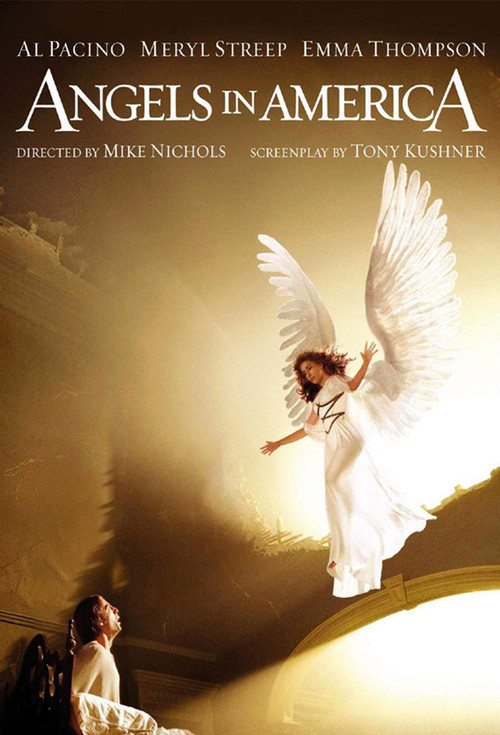 This dramatic adaptation of Tony Kushner’s award-winning play tracks several characters at the height of the AIDS crisis in mid-80s New York City, including Prior Walter (Kirk), a young HIV man who begins to have visions of an angel (Thompson) telling him he’s a prophet, and gay-bashing conservative lawyer Roy Cohn (Pacino), whose underling Joe Pitt (Wilson) is a closeted Mormon having an affair with Prior’s ex, Louis (Shenkman).

Tackling the AIDS panic, religious intolerance, and Reagan-era conservative politics, Nichols’s six-hour miniseries brings to the big screen everything that made Kushner’s original play a Broadway smash in 1993, including the caliber of his actors: Pacino plays real-life, rock-ribbed conservative lawyer Cohn with despicable malice, while Thompson and Streep thoroughly enjoy showier roles as supernatural visitors. (Streep, who won an Emmy for this, also plays Joe’s straitlaced Mormon mother.) Jeffrey Wright is especially winning here, reprising his stage role as a flamboyant nurse’s aide. With its poetically inflected dialogue and dreamy special effects, “Angels” is a vibrant, pop-political melodrama for any age.