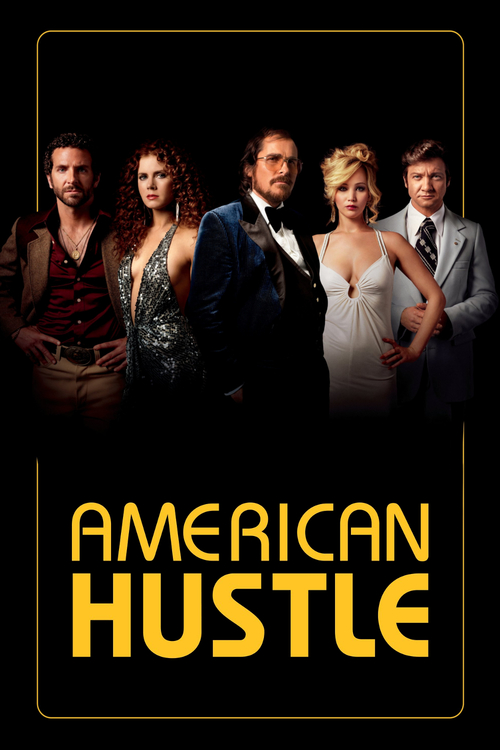 Irving Rosenfeld (Bale) and his lover, Sydney Prosser (Adams), are con-artists running elaborate investment scams. Busted by the FBI, they agree to participate in a sting operation headed by agent DiMaso (Cooper). Together, they target local politicians with the unwitting help of Carmine Polito (Renner), the mayor of Camden, NJ. But things quickly spin out of control; DiMaso gets greedy and tries to snare a bigger target: the Mafia. Meanwhile, their plans are threatened by Rosenfeld’s volatile wife, Rosalyn (Lawrence), who risks bringing down the whole, teetering house of cards. Will Irving and Sydney get out from under the authorities?

Loosely based on the real Abscam scandal that unfolded in the late ‘70s, where the F.B.I. attempted to catch U.S. congressmen taking bribes from fake Middle Eastern sheiks, Russell’s “Hustle” is a consistent delight, lifting what could have been a standard crime caper to giddy new heights. Bale, hidden beneath a bad comb-over and forty pounds of extra weight, breathes life into Irving, while Lawrence nearly steals the picture as Rosalyn, juggling pathos and comedy with aplomb. (Both actors received Oscar nods, along with Adams and Cooper.) With a tight and snappy script, kitschy production design, skillful editing, and inspired use of period music, this engaging thriller is the complete package. You should “Hustle” to see it.