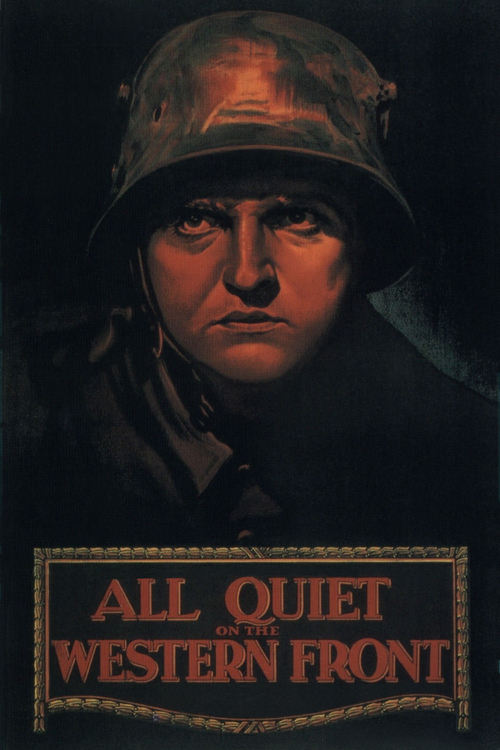 All Quiet On The Western Front

Based on the famous novel of the First World War by Erich Maria Remarque, this quintessential anti-war film traces the traumatic transition of raw German recruit Paul Baumer (Ayres), from naive idealist to shell-shocked veteran, on the blood-soaked battlefields of Europe. After he and his fellow students are cajoled into signing up for battle in a wave of patriotic fervor, Baumer arrives at the front — where he experiences a merciless onslaught of death and deprivation that quickly calls into question all the nobler sentiments that led him there. Only a tough but warm-hearted veteran, Sergeant Katczinsky (Wolheim), keeps Paul from going mad.

Still potent stuff over eighty years after its release, Lewis Milestone’s "All Quiet" portrays the genuine panic and bewilderment of enlisted soldiers at the front of “the war to end all wars.” This marked the first conflict where the means of manufacturing deadly weapons had advanced so far beyond the capacity of frontline soldiers to adapt, that even those recruits lucky enough to survive would often face ongoing, chronic psychological problems. The movie transcends dated elements to convey the full horror of this predicament, and the recurring tragedy of youth and innocence senselessly lost. Ayres is ideally cast as the green Baumer (the actor’s experience in this role actually led him to become a conscientious objector in World War 2), but the unprepossessing Wolheim is particularly memorable as Katczinsky. “Quiet” won Oscars for Best Director and Picture, the first “talkie” war film to do so. A triumph.