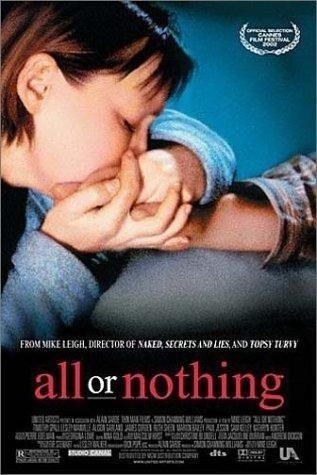 Phil (Spall) drives a taxi in outer London, and his common law wife Penny (Manville) is a cashier at the local supermarket. They seem like a stable couple on the surface, but tensions are roiling underneath. While their quiet daughter Rachel (Garland) works in an old people's home, their overweight, openly defiant son Rory (Corden) does nothing but lie on the sofa all day watching television. Meanwhile, Penny's friend and neighbor (Sheen) is a single mother with a pregnant teenage daughter, but unlike the fragile Penny, she doesn't let life get her down. When Rory is suddenly taken ill, Penny and Phil are rudely awakened from their quotidian rut and must reevaluate their relationship.

Seven-time Oscar nominee Mike Leigh excels in creating portraits of working class people. Following in the British tradition of kitchen sink realism, his distinctive filmmaking style yields grimly authentic characters and plotlines. Environment is also important, and here the bleak housing estate where Phil and Penny live reinforces the oppressive nature of their unhappiness. Leigh fleshes out the main story with excellent performances by Sheen and Hawkins as Penny's neighbors; both actors would go on to star in later Leigh entries. Spall in particular breaks your heart as a stifled, fearful middle-aged man unable to express himself. Manville matches him in an equally devastating performance of quiet rage. This may be one of Leigh's bleakest films, but moments of truth and eventual tenderness burst hopefully through the clouds.

All Quiet On The Western Front