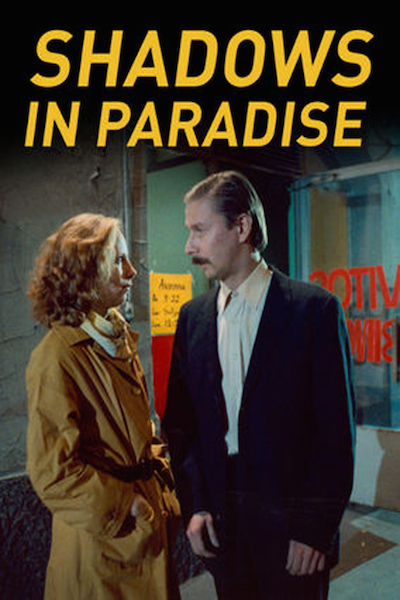 Criterion brings together three early works by acclaimed Finnish director Kaurismaki, starting with “Shadows in Paradise” (1986, 74 minutes). Nikander (Pellonpaa) is a taciturn garbage worker who awkwardly woos supermarket cashier Ilona (Outinen). “Ariel” (1988, 72 minutes) stars Pajala as Taisto, a laconic coal miner who goes to Helsinki to find work and falls for Irmeli (Haavisto), a quirky meter maid. “The Match Factory Girl” (1990, 69 minutes) is the darkest of the three tragi-comedies. Outinen stars as a socially awkward young woman whose monotonous work life is as bleak as her love life.

Combining the social realism of Mike Leigh with the deadpan humor of Jim Jarmusch, Kaurismaki’s films are triumphs of offbeat minimalism.  Setting his droll dramas in the grim, working-class neighborhoods of Helsinki, Kaurismaki’s camera moves little and elicits quiet, but affecting performances from his stable of expressive actors. Economic desolation and existential gloom infuse his scenarios, yet there is a Beckettian determination to his characters. Notable is Pellonpaa, whose lived-in face reflects the hardscrabble world of Kaurismaki’s cinema. Outinen is also outstanding in the almost silent “Match Factory Girl”, which leavens the prevailing mood of despair with an absurdist touch. With a soundtrack of bouncy, yet oddly fitting Sixties and contemporary rock, this trilogy is a wonderful introduction to Kaurismaki’s oeuvre.