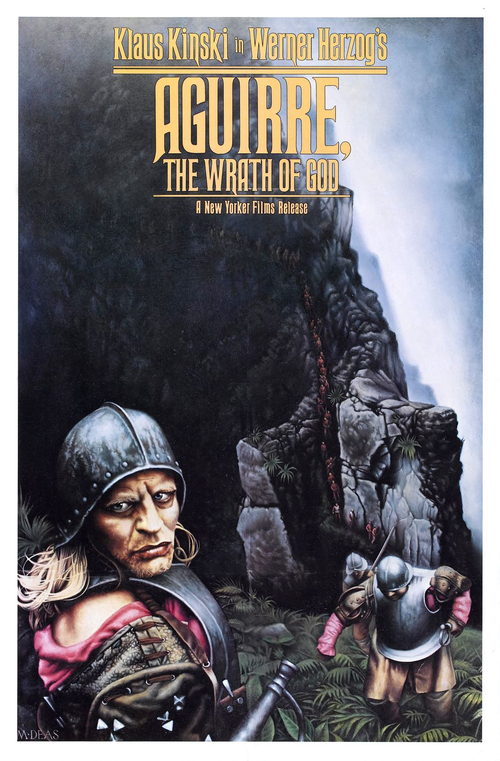 Aguirre: The Wrath of God

After forging ahead of a 400-man expedition searching for the mythical city of El Dorado, ambitious, half-insane conquistador Aguirre (Kinski) rebels against Pizarro's second-in-command, Don Pedro de Ursua (Guerra); he eventually declares himself sovereign, and kills anyone who doesn't bend to his maniacal will. Pressing ever deeper into the forbidding Amazonian basin, Aguirre bullies his mutinous gold-seekers into continuing their quixotic journey, despite extreme hardship, the lurking menace of unseen cannibals, and an increasingly uncertain outcome.

Lyrical and mesmerizing, this astonishing tale of megalomania and greed, told from the perspective of 16th-century monk Carvajal (Del Negro), is the ultimate Herzog-Kinski collaboration. Filmed on location in Peru under the very conditions it emulates, "Aguirre" has a dreamlike feel, amplified by Thomas Mauch's exemplary cinematography and Popol Vuh's haunting score. Kinski truly savored the role of Aguirre, delivering a brilliantly intense, even frightening performance not far removed from his real-life persona. Fascinating for its hallucinatory opening and closing shots alone, "Aguirre" is a deranged journey to the heart of darkness you won't want to miss.