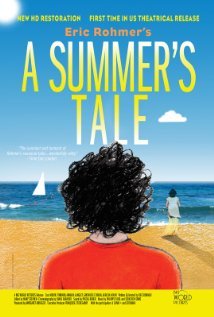 Gaspard (Poupaud), a mathematics graduate and aspiring musician, spends his summer at the Breton beach, idling away days waiting for his on/off girlfriend Lena to arrive. Meanwhile, he befriends the intellectually challenging Margot (Langlet), and they begin a platonic friendship — or is it? He is also drawn to the alluring Solene (Simon), who is not shy about her intentions. When Lena (Nolin) shows up at last, Gaspard finds himself juggling three women.

The third in director Rohmer’s “Four Seasons” series takes place in a summer idyll, full of youthful conversations about love and life. With his customary assurance, Rohmer orchestrates his characters in a constantly moving tableau of endless, seemingly carefree days in the sun. One can almost smell the sea air in Diane Baratier’s breezy cinematography. The appealing young actors turn in refreshingly natural performances in this stylistic and thematic forerunner to the “Before” films of Richard Linklater.

A Sunday in the Country