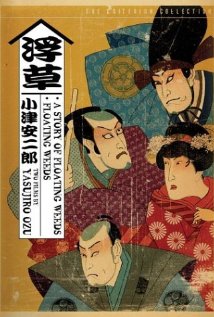 A Story of Floating Weeds

Twenty years after leaving his native village, the aging leader of a small kabuki-theater troupe (Sakamoto/Nakamura) returns and reconnects with an old lover (Iida/Sugimura) and their now-grown illegitimate son, who believes the traveling actor to be his uncle. But his current flame (Yagumo/Kyo), the lead performer in the troupe, becomes jealous when she guesses his secret former life, and engages a younger actress to seduce the man’s son, hoping somehow to taint his newfound happiness.

1934’s “A Story of Floating Weeds” marked Ozu’s move from frivolous comedies to the more earnest, family-oriented dramas that later became the hallmarks of this world-class filmmaker’s oeuvre. With its rigorous use of low camera angles, Zen-like static shots, and elliptical style of storytelling, “Story” became a prototype of sorts for the director. When Ozu remade the film in color and sound as "Floating Weeds" in 1959, he demonstrated the enduring appeal of the tale; its themes encompass remorse and jealousy, nostalgia and the passage of time. See both films for exquisite variations on this cinema master’s unparalleled human touch.