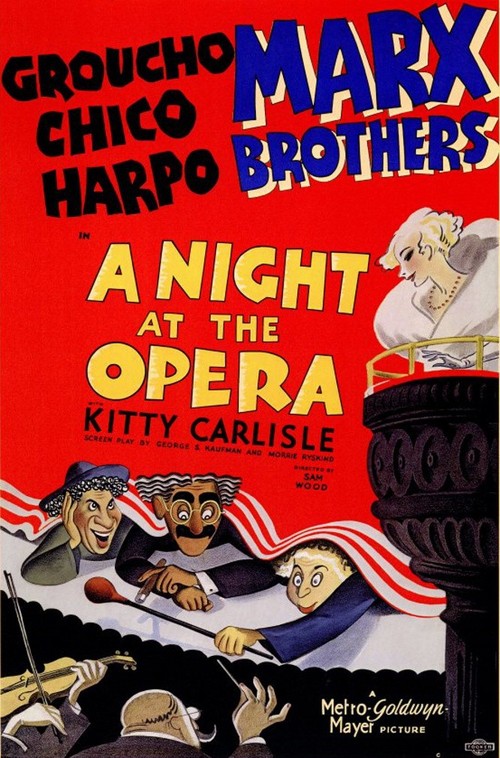 A Night at the Opera

Otis B. Driftwood (Groucho) is interested in arts patron Mrs. Claypool (Dumont) — or more precisely, Mrs. Claypool's checkbook. Along with new found confederates Fiorello (Chico) and Tomasso (Harpo), he's also interested in undermining the cruel, arrogant opera star Lasparri (King), while advancing the romance and careers of young performers Rosa and Ricardo (Carlisle and Jones). Through the force of comic anarchy, the three brothers manage to accomplish precisely that, but getting there's all the fun.

You could predict right up-front that grand opera would never be the same once the Marx Brothers got through with it. "Night," the first and best of the team's MGM releases, features more focus on plot, musical numbers and romance than their earlier, wonderfully pure Paramount outings. The results are still first-rate, with a splashy MGM production and a well-balanced romantic subplot (featuring a lovely young Carlisle) complementing some of the team's zaniest antics. In particular, watch for that immortal stateroom scene, and the impromptu baseball game during the "Opera." A bona-fide comedy classic.

A Night to Remember