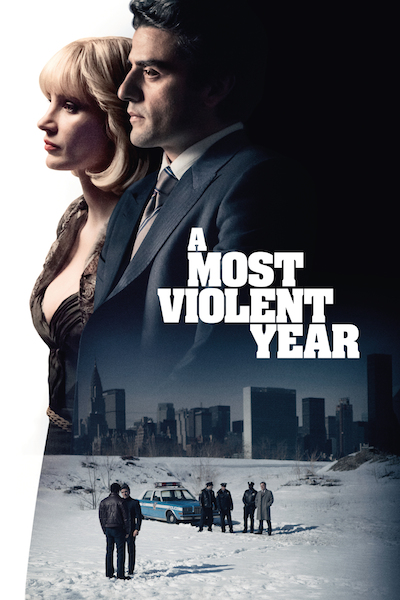 A Most Violent Year

New York City, 1981: Abel Morales (Isaac) is living the American Dream. He has big plans to expand his heating oil business. Also he’s just moved his beautiful wife Anna (Chastain) and two children into a suburban mansion. But his competitors don’t like Abel’s intrusion on their turf, and hire goons to hijack his trucks. Thus a brutal power struggle begins. As Abel tries to close on a piece of real estate that would seal his position in the oil industry, he struggles to keep his family safe and his morals intact.

Director Chandor’s third film (after “Margin Call” and “All is Lost”) continues to explore themes of masculine survival in cutthroat environments. Despite the title, the film is relatively violence-free, drawing its heightened tension from the characters and their relationships. Isaac gives a powerful, star-making performance as a deeply conflicted man, and Chastain is superb as his ruthless wife, quick to turn to her connected family for help. The supporting cast is also excellent, with Brooks a standout as Abel’s loyal counsel. Chandor proves himself a master of mood and simmering suspense in this throwback to the gritty, crime thrillers of the 1970s.