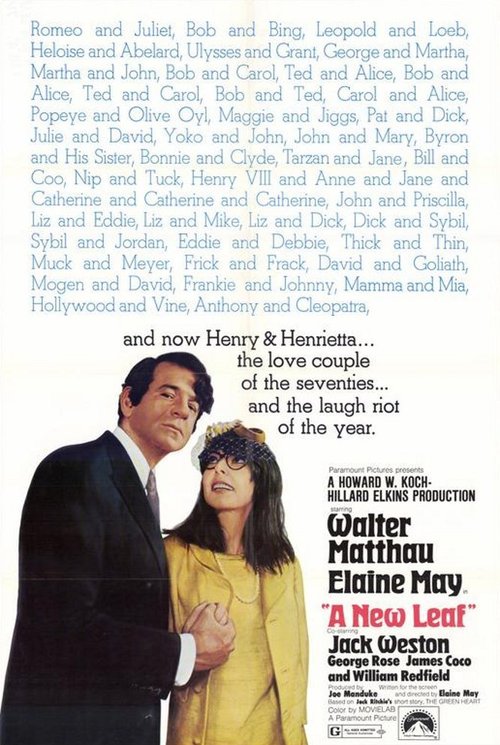 Wealthy, middle-aged bachelor Henry Graham (Matthau) has never worked, drives a Ferrari, lunches at Lutèce, and wears smoking jackets and ascots for cocktails. When his profligate spending exhausts his inheritance, his valet Harold (Rose) suggests marriage as the only option. With a short-term loan from his rich uncle (Coco), Henry sets about finding a suitable heiress. At the eleventh hour he spots Henrietta Lowell (May), a rich but hapless botanist whose life’s dream is to discover a new species of fern. Now Henry must race the clock to wed and woo the kooky heiress so that he can pay back his Uncle on time.

May’s debut behind the camera nearly didn’t see the light of day; she tried to block the film’s release after Paramount made severe edits to her initial cut. Regardless of her original vision, what remains is a delightful, loopy comedy, with Matthau turning in an uproarious performance as the pompous Henry. Co-star May proves adept at physical comedy, as her Henrietta fumbles teacups and glasses with flair; watch for the scene when she gets hopelessly tangled in her own nightgown. Weston is also priceless as Henrietta’s longtime shyster attorney. Particularly for Matthau fanatics (like us), this is one “Leaf” worth plucking.

A Night at the Opera