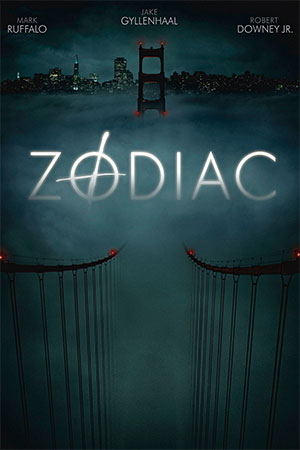 After a series of grisly murders shocks San Francisco residents in the 1970s, editorial cartoonist Robert Graysmith (Gyllenhaal) is drawn into the orbit of investigator David Toschi (Ruffalo) and crime reporter Paul Avery (Downey), who are each trying to make sense of the cryptic clues and menacing letters the Zodiac killer has left to taunt authorities. As time passes, and seemingly important leads turn up nothing but more questions, the Zodiac case begins to exact a heavy toll on the three men — but it's Graysmith who won't give up.

In this brooding police procedural, the director of "Seven," revisits a real-life case, that Bay Area investigators puzzled over for years. Adapted from two books written by Graysmith, Fincher's film centers on the experience of the obsessive illustrator, who sacrifices work, and ultimately a lot more, in order to discover the killer's identity. Gyllenhaal's fine turn as the guileless, intensely curious Graysmith is enhanced by Downey's own as a jaded beat reporter. Ruffalo's rugged cop, who discourages Graysmith from traveling too far down the rabbit hole, completes an effective three-way dynamic. Stylish, unnerving, and psychologically complex, "Zodiac" is a first-class detective tale with an epic sprawl.