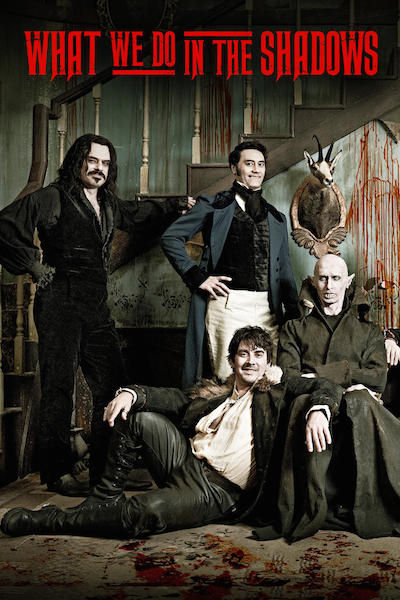 What We Do in the Shadows

Four vampires share a flat in a suburb of Wellington, New Zealand and bicker over household duties. Viago (Waititi), a 17th century fop, is fastidious and fussy, while Vlad (Clement) and Deacon (Brugh) just want to party. Last but not least, eight thousand year old Petyr (Fransham) festers Nosferatu-like in the basement. Vampires, zombies and werewolves come together for an annual bash called “The Unholy Masquerade” under the watchful eyes of an unseen camera crew.

Filmed in a faux documentary style, with handheld cameras and “fly on the wall” intimacy, this hilarious spoof of vampire culture and lore is the “Spinal Tap” of horror. Whether nagging about the dishes or blood on the couch, co-director/writer Waititi makes the funniest mark, with Darby as a pacific lycanthrope close behind. The loose, reality show format belies the intricate structure of non-stop one-liners and clever blood-sucking sendups. This deliriously goofy, genre-bending satire has real bite!